Austria, largely mountainous landlocked country of south-central Europe. Together with Switzerland, it forms what has been characterized as the neutral core of Europe, notwithstanding Austria’s full membership since 1995 in the supranational European Union (EU). Mountains and forests give the Austrian landscape its character, although in the northeastern part of the country the Danube River winds between the eastern edge of the Alps and the hills of Bohemia and Moravia in its journey toward the Alföld, or Hungarian Plain. Vienna lies in the area where the Danube emerges from between the mountains into the drier plains. 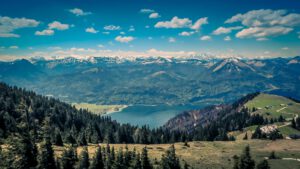